The Women and Religion Movement is alive and well in the 21st Century. It exists in UU Districts that hold Women & Religion programs and gatherings. It exists at General Assembly, where UUW&R sponsors programs and a fabulous booth in the display area. And it exists in the hearts and lives of women who have been touched by the many changes inspired by this movement. 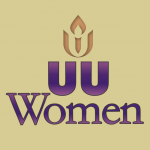 The Unitarian Universalist Women’s Federation, the circle of liberal religious women and men working to advance justice for women and girls and promote their spiritual growth. A membership organization, UUWF began as a merger of two long-running Universalist and Unitarian women’s organizations.

Also check out the drop down menus in this section for three additional resources that present important background, aspects, and perspectives of the Women and Religion Movement.